The Board of the Outdoor Council of Australia (OCA) has recently undertaken a review of the National Outdoor Leadership Registration Scheme (NOLRS). After significant deliberations the decision has been taken to phase out the NOLRS. The NOLRS will be maintained as a registration scheme until 30 June 2021. We thank the many outdoor organisations and leaders across Australia that have supported the scheme over the years. For further details see the news article here.

The Outdoor Council of Australia is expressing the concerns of the Australian outdoor community in calling for a better future and positive action on climate change.

The OCA has signed the Better Futures Australia open letter calling on Scott Morrison to commit to credible climate targets in line with our allies, and to do our fair share under the Paris Agreement. We have joined a community of some 96 climate leaders who are united in a common cause, and showcasing the readiness of Australians to act on climate now.

An open letter from the Better Futures Australia community – the time for
credible climate action is now.

We are writing to you as Australian leaders from every sector of the economy and society –
First Nations, finance and faith, cities and states, business big and small, agriculture,
resources and energy, health and social service, unions, think tanks, and higher education.
While we are diverse, we collectively represent more than seven million Australians. We are
coming together at this week’s Better Futures Forum united in our determination to act on
climate change, and we are rising to the challenge, and opportunities, it presents.

Like other Australians, we are ready to work in partnership with your government to
transition from fossil fuels in a fair and orderly way that leaves no one behind, build a
thriving economy and cohesive communities, and enjoy flourishing ecosystems, clean air,
and better health. And take advantage of the incredible opportunities our nation has to
create sustainable jobs, attract investment, regenerate industries and communities, and
make Australia – the sunniest nation on earth – a renewable energy superpower.

Our nation now faces a pivotal moment as heads of state prepare to meet at the UN
Climate Summit (COP26) in Glasgow in November, where they will make emissions
reduction pledges. You are one of these leaders, and you have an historic opportunity to
seize the moment and step up Australia’s climate ambition.
Australia’s goal of a 26-28% reduction on 2005 levels by 2030 and the absence of a
national zero emissions target is out of step with the States and Territories, our trading
partners, and other nations. It is insufficient to meet the Paris Agreement goal of keeping
warming to 1.5 degrees.

Australian corporations with tens of billions in market capitalisation have adopted near-term
targets for 100% renewable energy. Australia’s leading investors are committed to a zero
emissions economy.
The increasing ambition of States’ and Territories’ 2030 targets, alongside their shared
commitment to net zero emissions by or before 2050 demonstrates that with national
leadership, Australia can do our fair share under the Paris Agreement to keep warming to
1.5 degrees.

The shift from fossil fuels is inevitable, and the momentum unstoppable. Without further
ambition on its part, Australia will face increasing isolation and diminishing markets for its
resources. Carbon border adjustments will harm Australia’s economy, as other nations race
ahead, realising the opportunities for investment in the zero-carbon age.

To meet the obligations in the Paris Agreement – and protect the wellbeing of the
Australian people, our magnificent ecosystems, and our economic security – Australia
must establish a clear pathway to transition our economy to a zero emissions future.
The most important step is what we do in this decisive decade. Australian
commitments must, at the very least, match those by our allies in the US, the EU and
the UK.

Your leadership in delivering a step change to Australia’s emissions reduction commitments
is crucial if we are to forge the path to a better, healthier, just and more prosperous future
for all – a future that is within our reach in this remarkable country that we share.
The course of history, and the legacy we leave our children, is in your hands, Prime Minister.
We are moving ahead, and we need your support. The time to act is now.

More details can be found on the Better Futures website. 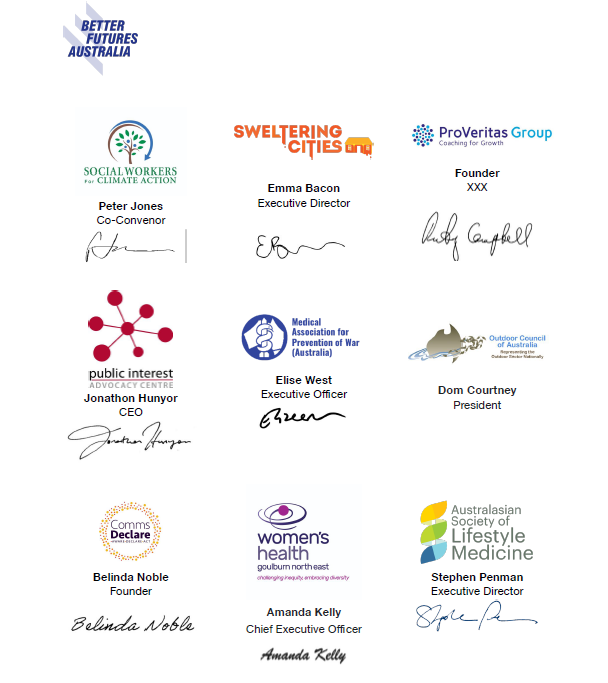