The Board of the Outdoor Council of Australia (OCA) has recently undertaken a review of the National Outdoor Leadership Registration Scheme (NOLRS). After significant deliberations the decision has been taken to phase out the NOLRS. The NOLRS will be maintained as a registration scheme until 30 June 2021. We thank the many outdoor organisations and leaders across Australia that have supported the scheme over the years. For further details see the news article here. 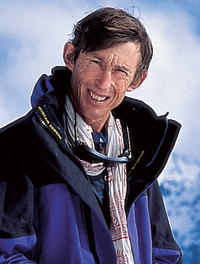 The OCA is very pleased that Tim Macartney-Snape has agreed to become our Patron and to be the public face of the organisation presenting outdoor recreation to a wider audience. Tim is a committed supporter of the power of the outdoors to positively affect lives, relationships and the environment itself.

I agreed to be patron because I think that outdoor education should be a vital component of any school’s curriculum and of course we are lucky to have such a great resource for it in this country.

Australiaʼs most well known mountaineer is a veteran of pioneering routes in remote regions of the Himalaya but is best known for his attempts of Mount Everest on two very different, pioneering expeditions. Remarkably he reached the summit on both occasions, without the use of bottled oxygen and in a style and substance of a class way beyond the realm of guided ascents so popular in recent times.

Of the dozens of climbs he has made in the Greater Himalaya, new and difficult routes on Gasherbrum IV and Annapurna II are his proudest achievements. As well as his extensive Himalayan experience Tim has climbed in Australia, Africa, Europe and South America. He trained as a biologist at the Australian National University, is also a qualified outdoor instructor, the author of several books, is active in business and promoting the biological explanation of the human condition.

Tim is a co-founder, director and part owner of the international outdoor equipment manufacturer, Sea to Summit Pty Ltd.